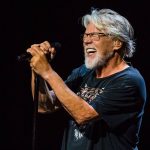 It’s the end of an era! Rock legend Bob Seger is on his very last tour, ever. Bob Seger & The Silver Bullet Band bring their Roll Me Away The Final Tour to Quicken Loans Arena (1 Center Ct. Cleveland) this Thursday Dec 6 at 7:30 p.m. Bob Seger is infamous as a singer-songwriter, guitarist and pianist. As a locally successful Detroit-area artist, he performed and recorded as Bob Seger and the Last Heard and Bob Seger System throughout the 1960s, breaking through with his first national hit and album in 1968. By the early 1970s, he had dropped the ‘System’ from his recordings and... Read More