It’s the end of an era! Rock legend Bob Seger is on his very last tour, ever.

Bob Seger & The Silver Bullet Band bring their Roll Me Away The Final Tour to Quicken Loans Arena (1 Center Ct. Cleveland) this Thursday Dec 6 at 7:30 p.m. 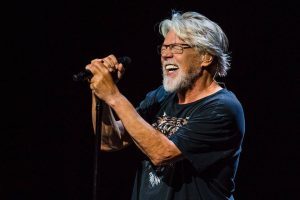 Bob Seger is infamous as a singer-songwriter, guitarist and pianist. As a locally successful Detroit-area artist, he performed and recorded as Bob Seger and the Last Heard and Bob Seger System throughout the 1960s, breaking through with his first national hit and album in 1968. By the early 1970s, he had dropped the ‘System’ from his recordings and continued to strive for broader success with various other bands. In 1973, he put together the Silver Bullet Band, with a group of Detroit-area musicians, with whom he became most successful on the national level with the album Live Bullet (1976), recorded live with the Silver Bullet Band in 1975 at Cobo Hall in Detroit, Michigan. In 1976, he achieved a national breakout with the studio album Night Moves. On his studio albums, he also worked extensively with the Alabama-based Muscle Shoals Rhythm Section, which appeared on several of Seger’s best-selling singles and albums.

Backed up by his talented, 14-piece Silver Bullet Band, Seger’s farewell gigs are a two-hour storied set that demonstrates the extent of his work. The shows are entirely a celebration of Seger’s career, with fans singing along to help the retiring musician hit notes to the fullest, and dance parties during gems like “Old Time Rock & Roll.”

Tickets are $75, $95 and $122. Purchase yours today at the Quicken Loans Arena Box Office or online at https://www.ticketmaster.com/bob-seger-the-silver-bullet-band-tickets/artist/771811.

Tess Abney
Tess Abney is a freelance writer who was born and raised in the Quad Cities. She spends most of her time attempting to successfully raise three boys. In her free time, writing is her passion. Whether it is sharing local events and businesses with readers or sharing her thoughts on life, she finds comfort in the way words can bring people together.
Tagged: Bob SegerClevelandEventsQuicken Loans ArenaRoll Me AwayThe Final TourThe Silver Bullet BandThings To Do