Thrice Rocking Out at House of Blues 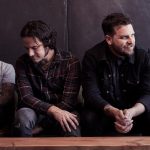 Alternative rock band, Thrice, is on tour and making a stop in Cleveland. Thrice, along with The Bronx and Teenage Wrist, take the stage at the House of Blues (308 Euclid Ave. Cleveland) this Wednesday Oct 10 at 6:30 p.m. American rock quartet Thrice formed in the late ’90s and became one of the more influential acts of the period alongside post-hardcore contemporaries Glassjaw and Thursday. After a pair of early-2000s punk releases, they broke into the mainstream with 2003’s brooding hardcore The Artist in the Ambulance and 2005’s atmospheric Vheissu. Into the 2010s, Thrice issued... Read More