Home » Articles » Music » Thrice Rocking Out at House of Blues

Thrice Rocking Out at House of Blues

Alternative rock band, Thrice, is on tour and making a stop in Cleveland.

Thrice, along with The Bronx and Teenage Wrist, take the stage at the House of Blues (308 Euclid Ave. Cleveland) this Wednesday Oct 10 at 6:30 p.m. 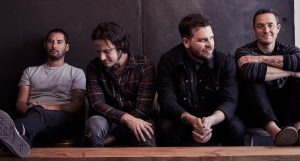 American rock quartet Thrice formed in the late ’90s and became one of the more influential acts of the period alongside post-hardcore contemporaries Glassjaw and Thursday. After a pair of early-2000s punk releases, they broke into the mainstream with 2003’s brooding hardcore The Artist in the Ambulance and 2005’s atmospheric Vheissu. Into the 2010s, Thrice issued five consecutive indie Top Five efforts, peaking with 2016’s hard rock-leaning To Be Everywhere Is to Be Nowhere.

In 2012, the band announced a hiatus, which was to continue for three years. In 2015, Thrice returned with appearances at several major music festivals, announcing a new album at the end of the year. Recorded with Eric Palmquist and entitled To Be Everywhere Is to Be Nowhere, their ninth album was released in May 2016. Signing with Epitaph Records in 2018, Thrice returned with “The Grey,” their first single for the label, which later landed on their tenth studio effort, Palms.

Tess Abney
Tess Abney is a freelance writer who was born and raised in the Quad Cities. She spends most of her time attempting to successfully raise three boys. In her free time, writing is her passion. Whether it is sharing local events and businesses with readers or sharing her thoughts on life, she finds comfort in the way words can bring people together.
Tagged: ClevelandEventsHouse of BluesTeenage WristThe BronxThings To DoThrice