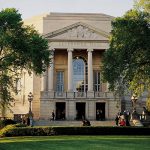 The Cleveland Orchestra announced details of its popular Summers@Severance series, which, for the first time, will include four concerts — as part of an ongoing effort to bring more great music to University Circle in the summer — and an add-on feature film: Batman (1989) in concert. These summer concert experiences boast the best that Severance Hall has to offer, inside and out. Not only will guests enjoy the perfect evening of music in one of the world’s most beautiful concert halls, they’ll also be invited onto the picturesque Front Terrace of Severance Hall to relax under the... Read More