The Cleveland Orchestra announced details of its popular Summers@Severance series, which, for the first time, will include four concerts — as part of an ongoing effort to bring more great music to University Circle in the summer — and an add-on feature film: Batman (1989) in concert. These summer concert experiences boast the best that Severance Hall has to offer, inside and out. Not only will guests enjoy the perfect evening of music in one of the world’s most beautiful concert halls, they’ll also be invited onto the picturesque Front Terrace of Severance Hall to relax under the summer sky with great drinks and great company, pre- and post-concert. 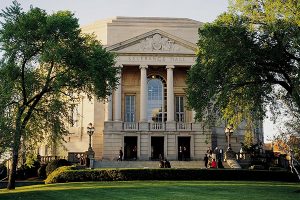 The summer series of orchestra concerts, sponsored by Thompson Hine LLP, will take place July 12, July 19, August 2, and August 16, featuring a range of music from Mahler to Mozart to Mendelssohn. And as a special add-on, the feature film Batman (1989) will be presented with The Cleveland Orchestra performing the soundtrack live on August 23 and 25.

The Front Terrace of Severance Hall will be open before and after each concert, with beverage/food service and seating areas. Plus, special “happy hour” drink prices will be offered in the hour prior to each concert, with guests encouraged to arrive early and enjoy the outdoors. Series tickets (all four concerts as a package) for Summers@Severance start at just $76, a savings of 25% over individual ticket prices, and are now on sale through the Severance Hall Ticket Office (216-231-1111) or online at clevelandorchestra.com. Individual concert tickets go on sale beginning in April. Batman (1989) concert tickets go on sale in March.

This year’s Summers@Severance series opens July 12 with Music Director Franz Welser-Möst leading the Orchestra in a passionate song cycle fueled by love and loss: Mahler’s Songs of a Wayfarer, with German baritone Ludwig Mittelhammer, who recently made his Cleveland Orchestra debut in the January 2019 made-for-Cleveland opera production of Strauss’s Ariadne auf Naxos. The program also includes Prokofiev’s stunning Symphony No. 6, which continues Welser-Möst’s re-discovery of the Russian composer’s work.

On July 19, Spanish conductor Pablo Heras-Casado joins The Cleveland Orchestra in an evening of colorful music featuring famed classical guitarist Pepe Romero performing the most beloved of all guitar concertos, Rodrigo’s Concierto de Aranjuez. Paired with the Spanish rhythms of the concerto is Debussy’s seductive soundscape “Ibéria” from Images — inspired by impressions of Spain.

On August 2, under the baton of British conductor Matthew Halls, the Orchestra will perform one of Mozart’s greatest works: his Mass in C minor. Written as a celebration of his marriage, the masterpiece will feature soprano Joélle Harvey, mezzo-soprano Krisztina Szabo (making her Cleveland Orchestra debut), tenor Paul Appleby, and bass-baritone Michael Sumuel, joined on stage by the Blossom Festival Chorus.

The Summers@Severance series concludes on August 16 with acclaimed Finnish conductor, and frequent Cleveland collaborator, Osmo Vänskä leading the Orchestra in a performance of Barber’s Symphony No. 1 in One Movement, which made its American premiere at Severance Hall with The Cleveland Orchestra in 1937, and music director Artur Rodziński. The evening of music closes with Mendelssohn’s Symphony No. 4, written to evoke the captivating sights and sounds of Italy.

Summer feature film add-on: On August 23 and 25, return to Gotham City to experience the classic battle of good vs. evil — DC Comics’ Caped Crusader, played by Michael Keaton, vs. the Clown Prince of Crime, portrayed by legendary actor Jack Nicholson — in the original superhero blockbuster: Batman (1989). Featuring the menacing, Grammy Award-winning score by Danny Elfman and the iconic world created by director Tim Burton, this 1989 superhero masterpiece comes to Severance Hall for a two-concert event. With the added excitement of live music by The Cleveland Orchestra, one couldn’t ask for a better way to rediscover this spectacular movie that paved the way for the superhero film genre.

Series tickets (all four concerts as a package) for the Summers@Severance series start at $76, a savings of 25% over individual ticket prices, and are now on sale through the Severance Hall Ticket Office or online at clevelandorchestra.com. Individual tickets go on sale beginning in April and start at $25. Batman (1989) concert tickets start at $45 and go on sale in March. Summers@Severance subscribers will receive priority to purchase Batman (1989) before it goes on sale to the general public. For more information about purchasing tickets, call Cleveland Orchestra Ticket Services at 216-231-1111 or 800-686-1141, or visit clevelandorchestra.com. Severance Hall Second Century Fund: a $2.00 charge on individual tickets will support the conservation and enhancement of Severance Hall.

The Severance Hall Ticket Office is located on street level in the Smith Lobby. The Ticket

Office entrance and 15-minute Ticket Service parking are on the west side of the building, along East Boulevard. Severance Hall Ticket Office hours are Monday through Friday from 9:00 a.m. to 6:00 p.m. and, from September through May, on Saturdays from 10:00 a.m. to 6:00 p.m.

SONGS OF A WAYFARER

MAHLER  Songs of a Wayfarer
PROKOFIEV  Symphony No. 6

Enjoy a summer romance. Hear Mahler’s melodious take on love in a song cycle that was inspired by the composer’s own tale of passion and longing.

Experience the majesty of Mozart. Haunting and glorious, the composer’s Great Mass — considered one of his finest works — lives up to its name.

Che bello! A reflection on the sights and sounds of Italy, Mendelssohn called this symphony “the jolliest work I have so far written.”

Rediscover the movie that ushered in a new era of superhero films on the big screen at Severance Hall — with the music played live!

Not part of the Summers@Severance subscription series.

Tess Abney
Tess Abney is a freelance writer who was born and raised in the Quad Cities. She spends most of her time attempting to successfully raise three boys. In her free time, writing is her passion. Whether it is sharing local events and businesses with readers or sharing her thoughts on life, she finds comfort in the way words can bring people together.
Tagged: ClevelandCleveland OrchestraEventsMahlerProkofievSeverance Hallsummer concertsSummers@SeveranceThings To DoUniversity Circle