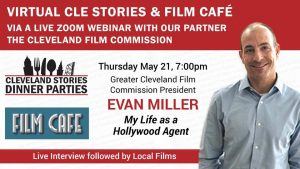 The interview will be followed by local short films.

Evan Miller joins us to share his experiences working as an agent in Hollywood. He came to Cleveland this year from Abrams Artists Agency, where he served as a feature film and television talent agent, representing a wide array of clients in film, television, and theater. We are excited to hear his story and what he plans to bring to Cleveland film! Evan will also be discussing filmmaking during the pandemic and how to get back on your feet.

Evan Miller is the president of the Greater Cleveland Film Commission. He cames to the GCFC from Abrams Artists Agency, where he served as a feature film and television talent agent, representing a wide array of clients in film, television and theater. In his role, he worked collaboratively with clients, writers and producers to foster projects from script to screen, as well as established relationships with feature and television development executives – skillsets and connections that he leverages in his new position. Prior to Abrams Artists, he served as an agent at the Bauman, Redanty & Shaul Talent Agency. Miller grew up in Cleveland, and he is a graduate of The Ohio State University with a Bachelor of Science in Business Administration and Marketing. He is a passionate believer in Cleveland’s potential to become a leading destination for film, television and theater production and is committed to continuing to focus the GCFC’s efforts on expanding the tax credit to $100 million.

The goal of the Cleveland Stories Dinner Party is to bring to life some of the fun, interesting stories about Cleveland’s past – from sports, to rock ‘n roll, to Millionaire’s Row, — the series will focus on tidbits from Cleveland’s past that will really thrill the audience. The Music Box is presenting this series in partnership with the Western Reserve Historical Society’s new Cleveland History Center. We think the Cleveland History Center is one of the most important museums in Cleveland. An unknown gem that Clevelanders should know more about, and support. It is the only museum in Cleveland dedicated to preserving and documenting the history of Cleveland. The Cleveland History Center includes two mansions, the Crawford Auto Aviation Museum, Chisholm Halle Costume Wing, Research Library, Kidzibits Hands-On Gallery, rotating exhibitions, and the Euclid Beach Park Grand Carousel.

Tess Abney
Tess Abney is a freelance writer who was born and raised in the Quad Cities. She spends most of her time attempting to successfully raise three boys. In her free time, writing is her passion. Whether it is sharing local events and businesses with readers or sharing her thoughts on life, she finds comfort in the way words can bring people together.
Tagged: ClevelandEvan MillerEventsMusic Box Supper ClubonlineThings To DoVirtual Film Cafe