The Cleveland Orchestra announces additional program details for its 30th annual free community concert in downtown Cleveland, which takes place rain or shine on Wednesday, August 7 at 9:00 p.m. This year’s Star-Spangled Spectacular, brought to you by Cuyahoga Arts & Culture and sponsored by KeyBank, will be held on Cleveland’s spacious Mall B, located at 300 St. Clair Avenue, between the Global Center for Health Innovation and Cleveland Public Auditorium. 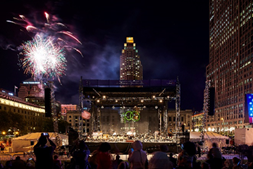 Led by guest conductor Loras John Schissel, this annual presentation celebrates our nation and our extraordinary Northeast Ohio community with music performed by The Cleveland Orchestra.

Previously announced information from May 2019 can be found at the following link: https://www.clevelandorchestra.com/News-and-Updates/News-Releases/2019-releases/2019-05-09-star-spangled-spectacular-concert/.

Before The Cleveland Orchestra takes the stage, audience members will have an opportunity to enjoy a variety of engaging activities, including:

As part of the Orchestra’s ongoing commitment with ideastream — Northeast Ohio’s innovative public multimedia source — to provide greater access to music and culture for the citizens of Cuyahoga County and beyond, the Star-Spangled Spectacular will be streamed live on clevelandorchestra.com, The Cleveland Orchestra Facebook page and YouTube channel. The concert will also be broadcast by radio on 90.3 WCPN, WCLV 104.9, and online at ideastream.org.

A pair of free Star-Spangled Spectacular Family Workshops will take place in partnership with the Cuyahoga County Public Library on Tuesday, August 6 — at their branches in Solon (10:00 a.m.) and Berea (6:30 p.m.). These unique workshops will preview the music and help families prepare for the following day’s special performance.

Located a few blocks northeast of Public Square, between the Global Center for Health Innovation and Cleveland Public Auditorium on St. Clair Avenue, Mall B is a grassy field that’s ideal for watching the concert while relaxing on a blanket or low lawn chair.

Attendees are encouraged to take the Regional Transit Authority (RTA) to the event. RTA’s Red, Blue, and Green lines run until midnight, with free parking at most of the train stations. Mall B is a five-minute walk from RTA’s Tower City Station. Additionally, the RTA HealthLine operates 24/7 from Windermere’s Louis Stokes Station to Public Square. Visit www.riderta.com for current routes and schedules.

Cuyahoga Arts & Culture (CAC) is one of the largest public funders for arts and culture in the nation, helping hundreds of organizations in Cuyahoga County connect millions of people to cultural experiences each year. Since 2007, CAC has invested more than $182 million in more than 400 organizations both large and small, making our community a more vibrant place to live, work, and play. For more information, visit cacgrants.org.

This community celebration is supported by the residents of Cuyahoga County through
a public grant from Cuyahoga Arts & Culture.

This concert is brought to you by Cuyahoga Arts & Culture and sponsored by KeyBank.

Additional support from Greater Cleveland Regional Transit Authority in collaboration with media partnerideastream and in coordination with logistical partners City of Cleveland and Downtown Cleveland Alliance.

Location:
Mall B in downtown Cleveland
Between Lakeside and St. Clair Avenues

All artists and programs are subject to change.

Tess Abney
Tess Abney is a freelance writer who was born and raised in the Quad Cities. She spends most of her time attempting to successfully raise three boys. In her free time, writing is her passion. Whether it is sharing local events and businesses with readers or sharing her thoughts on life, she finds comfort in the way words can bring people together.
Tagged: ClevelandCuyahoga Arts and CultureEventsKey BankMall BmusicStar Spangled SpectacularThe Cleveland OrchestraThings To Do