Come see all of the fan favorites including Walter, Peanut, Achmed, Jose! 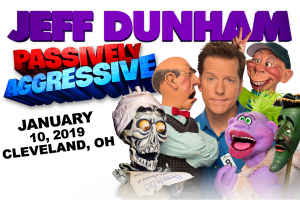 Jeff Dunham is a ventriloquist and comedian who has also appeared on numerous television shows, including Late Show with David Letterman, Comedy Central Presents, The Tonight Show and Sonny With a Chance. He has six specials that run on Comedy Central: Jeff Dunham: Arguing with Myself, Jeff Dunham: Spark of Insanity, Jeff Dunham’s Very Special Christmas Special, Jeff Dunham: Controlled Chaos, Jeff Dunham: Minding the Monsters, and Jeff Dunham: All Over the Map. Dunham also starred in The Jeff Dunham Show, a series on the network in 2009.

His style has been described as “a dressed-down, more digestible version of Don Rickles with multiple personality disorder”. Time described his characters as “politically incorrect, gratuitously insulting and ill tempered.” Dunham has been credited with reviving ventriloquism and doing more to promote the art form than anyone since Edgar Bergen.

Ticket prices vary and can be purchased at the Wolstein Center Box Office, by calling (888) 324-5849 or online at http://www.wolsteincenter.com/event/jeff-dunham-2019/.

Tess Abney
Tess Abney is a freelance writer who was born and raised in the Quad Cities. She spends most of her time attempting to successfully raise three boys. In her free time, writing is her passion. Whether it is sharing local events and businesses with readers or sharing her thoughts on life, she finds comfort in the way words can bring people together.
Tagged: ClevelandCleveland State UniversityComedyEventsJeff DunhamPassively Aggressive TourThings To DoventriloquistWolstein Center