Whether you know him from TV, the Big Screen on Onstage- there is not doubt that Aziz Ansari is one funny guy! 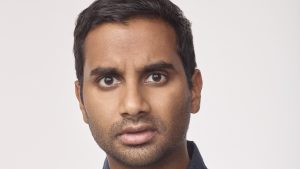 Aziz Ansari started performing stand-up in New York during his college years. In 2007, he debuted his first comedy series, Giant Human, on MTV. Ansari landed a supporting part on the popular sitcom Parks and Recreation in 2009, which ran until 2015. That same year he launched Master of None and went on to snag Emmy and Golden Globe wins for his work on the show.

Ticket prices range from $41.75 – $67.75 and can be purchased online at https://www.ticketmaster.com/aziz-ansari-keybank-state-theatre-at-playhouse-cleveland-oh/venueartist/42122/1005201.

Tess Abney
Tess Abney is a freelance writer who was born and raised in the Quad Cities. She spends most of her time attempting to successfully raise three boys. In her free time, writing is her passion. Whether it is sharing local events and businesses with readers or sharing her thoughts on life, she finds comfort in the way words can bring people together.
Tagged: Aziz AnsariClevelandComedyEventsKeyBank State TheatreMaster of NonePark and RecreationPlayhouse SquareThings To Do