Vinay Parameswaran joined the conducting staff of The Cleveland Orchestra in August 2017. Over the past two seasons as assistant conductor, he has been active in education and community performances, provided support to Music Director Franz Welser-Möst, and served as cover conductor for Severance Hall and Blossom Music Festival concerts — including during the milestone 100th Cleveland Orchestra season and 50thAnniversary season of Blossom Music Center. On July 6, 2018, he stepped in for Music Director Franz Welser-Möst at the Orchestra’s free, public 100th birthday celebration in downtown Cleveland — the 2018 Star-Spangled Spectacular. 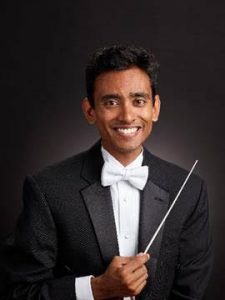 “I am thrilled to be spending another two seasons in Cleveland, working with the extraordinary musicians of The Cleveland Orchestra and Music Director Franz Welser-Möst,” said Mr. Parameswaran. “It was an honor to be part of the Orchestra’s historic 100th season — as well as the 50thanniversary of Blossom Music Center — and I am proud to continue to be a part of this ensemble’s storied history. I look forward to continuing as Music Director of the Cleveland Orchestra Youth Orchestra, coaching and conducting one of the absolute finest youth ensembles. The next generation of classical music has a very bright future, as shown by the talent and dedication of these young musicians.”

Currently in his second season as Music Director of the Cleveland Orchestra Youth Orchestra, Mr. Parameswaran oversees artistic planning, selects musicians for the ensemble, and leads rehearsals and performances with this talented group of middle- and high-school-aged musicians. He will lead the ensemble on its third international tour, with details to be announced this spring.

Mr. Parameswaran is the conductor on the album Two x Four featuring the Curtis 20/21 ensemble as well as violinists Jaime Laredo and Jennifer Koh. Along with works by Bach, David Ludwig, and Philip Glass, the recording included Anna Clyne’s Prince of Clouds, which received a 2014 GRAMMY nomination for Best Contemporary Classical Composition. He has participated in conducting masterclasses with David Zinman at the National Arts Centre Orchestra in Ottawa, Canada, as well as with Marin Alsop and Gustav Meier at the Cabrillo Festival of Contemporary Music.

A native of the San Francisco Bay Area, Mr. Parameswaran played as a student for six years in the San Francisco Symphony Youth Orchestra.  He holds a Bachelor of Arts degree in Music and Political Science from Brown University, where he graduated with honors. At Brown, he began his conducting studies with Paul Phillips. He received a diploma from the Curtis Institute of Music, where he studied with Otto-Werner Mueller as the Albert M. Greenfield Fellow.

About the Cleveland Orchestra Youth Orchestra

The Cleveland Orchestra Youth Orchestra is supported by a generous grant from the Martha Holden Jennings Foundation and by gifts from many other donors from across Northeast Ohio.  Endowment support is provided by The George Gund Foundation. For more information, please visit http://www.clevelandorchestra.com/about/choruses-and-ensembles/youth-orchestra/.

Tess Abney
Tess Abney is a freelance writer who was born and raised in the Quad Cities. She spends most of her time attempting to successfully raise three boys. In her free time, writing is her passion. Whether it is sharing local events and businesses with readers or sharing her thoughts on life, she finds comfort in the way words can bring people together.
Tagged: Assistant ConductorClevelandContractSeverance HallThe Cleveland OrchestraVinay Parameswaran