Noir at the Bar

Do you love twisted tales of murder, mystery, and mayhem? Grab a drink and take a walk on the dark side with us! 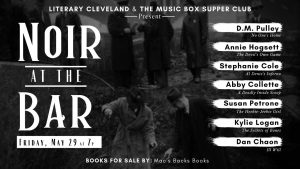 Join Literary Cleveland and Music Box Supper Club this Friday May 29 at 7 p.m. for a virtual happy hour and hear Cleveland authors tell gritty stories pulled from their published and unpublished work. You might just win a free book!

Register for this free through Crowdcast: https://www.crowdcast.io/e/noir-at-the-bar

D.M. Pulley is the author of four novels, including The Dead Key (2015), The Buried Book (2016), and The Unclaimed Victim (2017).  Her latest book, No One’s Home (2019), unravels the disturbing history of an old mansion haunted by family secrets, financial ruin, and murder.

Stephanie Cole is the author a new Tuscany-set mystery, Al Dente’s Inferno (Berkley), that debuted in February. The next in the series, Crime of the Ancient Marinara, comes out in January 2021. Writing as Shelley Costa, she has published several novels, including You Cannoli Die Once, Basil Instinct, Practical Sins for Cold Climates, and A Killer’s Guide to Good Works.

Abby Collette (who also writes as Abby L. Vandiver) has penned more than twenty books and short stories. Her new cozy from Penguin Berkley, A Deadly Inside Scoop, is the first in the new Ice Cream Parlor Mystery series set in Chagrin Falls, OH.

Susan Petrone is the author of the The Heebie-Jeebie Girl (2020), The Super Ladies (2018), Throw Like a Woman (2015), and A Body at Rest (2009). Susan’s short fiction has been published by Glimmer Train, Muse, Conclave, Cleveland Review, and Whiskey Island.

Kylie Logan is the author of 63 novels, including the Jazz Ramsey mystery series.  The second installment in the series, The Secrets of Bones, has just been published by St. Martin Minotaur. As Casey Daniels, she’s written several series, including the Pepper Martin books in which Pepper solves mysteries for the ghosts in the cemetery where she works.

Dan Chaon is the author of three short story collections and three novels, including Among the Missing, which was a 2001 finalist for the National Book Award, and Ill Will, which was named one of the best books of 2017 by The New York Times and others.

Tess Abney
Tess Abney is a freelance writer who was born and raised in the Quad Cities. She spends most of her time attempting to successfully raise three boys. In her free time, writing is her passion. Whether it is sharing local events and businesses with readers or sharing her thoughts on life, she finds comfort in the way words can bring people together.
Tagged: ClevelandEventsLiterary ClevelandMusic Box Supper ClubNoir at the BaronlineThings To Do