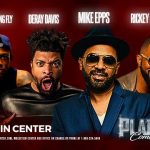 Do you need more laughter in your life? Then make plans to head to the Wolstein Center this weekend! The hilarious Platinum Comedy Tour is hitting the stage at the Wolstein Center at Cleveland State University (2000 Prospect Ave E Cleveland) this Sunday May 13 at 8 p.m. The Platinum Comedy Tour brings Mike Epps, Deray Davis, Rickey Smiley and DC Young Fly together for an evening filled with unforgettable side-splitting entertainment. Mike Epps is a stand-up comedian, actor, film producer, writer, and rapper. He is best known for playing Day-Day Jones in Next Friday and its sequel, Friday After... Read More