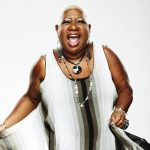 Ready for some laughs this weekend? Make plans to head to Cleveland Improv (1148 Main Ave Cleveland) to catch comedian Luenell live onstage! Luenell, best known for her breakthrough role as the “hooker with the heart of gold” in the blockbuster comedy “Borat”, is recognized by both mainstream and urban audiences as one of the funniest comics working today. Her two-year tour and DVD appearances in “Katt Williams American Hustle” have created an almost cult-like following. Luenell had an amazing 2012 with appearances in three #1 feature films – “Think Like A Man”, 3D animated... Read More