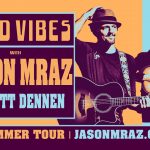 Hey Cleveland, are you ready for some GOOD VIBES this weekend? GOOD VIBES, with Jason Mraz and Brett Dennen is coming to Jacobs Pavilion at Nautica (2014 Sycamore St. Cleveland) this Friday Jul 27. Gates for this all-ages show will open at 7 p.m. and the show will begin at 8 p.m. Following a successful stint on Broadway in the cast of Waitress the Musical, Jason Mraz has announced a return to touring. The singer-songwriter will be joined by supporting act Brett Dennen on the GOOD VIBES Tour. The GOOD VIBES Tour will kick-off in Cleveland with Mraz fronting a band made up of Molly Miller on lead... Read More