International Women’s Day Is A Thing? 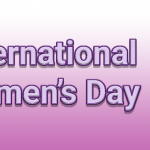 As you were scrolling through your phones or computers yesterday, you may have noticed it was International Women’s Day. I personally have been a woman for quite some time now and was completely unaware of this magnificent opportunity to celebrate my existence, until now. Anyone else? I was even more shocked to find out that the day of observance was initially organized in New York back in 1909. What?! It turns out the earliest Women’s Day observance, called “National Woman’s Day,” was held on February 28, 1909, in New York, organized by the Socialist Party of America... Read More