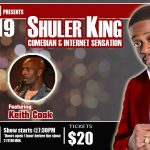 Comedian and internet sensation, Shuler King, is making his way to Cleveland! Shuler King takes the stage at Cleveland Improv (1148 Main Avenue Cleveland) this Wednesday Feb 13. Doors open at 6:45 p.m. and the show begins at 7:30 p.m. Comedian Shuler King was born Frank Williams III in Sumter, South Carolina. He knew at an early age that he was destined to be an entertainer especially since he was the kid known for cracking jokes. King grew up in a traditional 2-parent household in the Bible Belt of the South, where Faith, Hard Work and Education were the foundations of what his parents imparted... Read More