Death and Taxes, Are They Both Really That Certain? 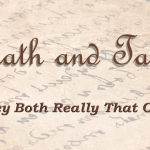 Eccentric founding father Benjamin Franklin once wrote in a letter from 1789, “in this world nothing can be said to be certain, except death and taxes.” This quote has been referred to repeatedly for the past 230 years. And while it may ring true to most, there have probably been just as many undiscovered tax evasion cases as references to his famous words. Still haven’t heard of any eventual death evasions, even though the jury is still out on Walt Disney. The morbid reality we all live with every day, is that our physical existence here is temporary. We know this. While I’m sure the number... Read More