It’s A Crisis For DC 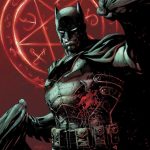 In the last two weeks DC Comics has released two comics that have garnered a lot of attention. Just to be safe let’s establish both spoiler and mature content warnings. Two weeks ago was the release of Batman: Damned #1. Which included the first appearance of Batman’s penis, affectionately dubbed The Batawang (not in the comic itself, obviously).  This sparked some controversy, which should have been expected, but is so tiresome. Some retailers got angry that a book, heralded as DC’s first comic in their Black Label line of mature readers comics, but unlike Vertigo these comics... Read More