So… let’s talk about season two of Iron Fist.

And I don’t want you to think that’s a condemnation of season two. I would go so far as to say that season two of Iron Fist is the best show of all the second seasons of Marvel’s Netflix series. Which came as a big surprise to me, as I’m sure it did to most people. Not that I hated the first season, it just wasn’t 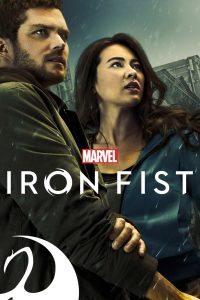 the show I expected given the source material. I was definitely expecting more out of season two, mostly because the show runner for season one, Scott Buck, was placed in charge of Inhumans after he finished Iron Fist. That went about as well as season one of Iron Fist did and he wasn’t asked to return for season two. Instead M. Raven Metzner was asked to take over. He wasn’t an unknown as far as superhero adaptations are concerned, he wrote the Elektra movie starring Jennifer Garner… moving hastily on.

What has really struck me is how, with their second seasons, the Marvel Netflix shows seem to have flipped in quality from how I would rank their first seasons (not including Defenders or Punisher since second seasons haven’t come out yet). With Jessica Jones at the top and Iron Fist at the bottom. I’m not sure how much of that comes from the amount of expectations I came into the second seasons based on the first. Like I said I loved the first season of Jessica Jones, but that second season was very meandering and padded. It felt like after Killgrave they didn’t have a through line to base the next season on. There’s a lot of time spent building up Trish’s character and fleshing out how the two step-sisters relate to each other. I’m all for that, but in doing so they almost assassinate your empathy for Trish in the process and all to progress her towards her comic book identity of Hellcat. Which I can get behind personally, but for people not already invested in the comic book version of Patsy it might have been a bridge to far.

On the padding side of things maybe Iron Fist benefited from having a shorter episode order then the other seasons; only getting ten episodes against all the other seasons being thirteen (with the exception of The Defenders, which got eight). I can only speculate on why they did that. Maybe because unlike the other Netflix shows Iron Fist has the flashier, CGI necessary, power that needs more money to bring to the screen. Maybe after seeing the reviews of the first season someone thought that less of Danny would be more. Either way it made great use of it’s ten episodes and it’s something I would like to see replicated with the other Netflix heroes. For example there’s three episodes of Luke Cage season one and at least one from Cage season two (ironically the one with Iron Fist in it) that I’d like to see excised to improve the pacing for those seasons.

My favorite addition to Iron Fist season two was Alice Eve’s Mary Walker, who shouldn’t be related to Patsy. The comic origin of Mary comes from the Daredevil comics as Mary Walker is the real name of super villian Typhoid Mary, an assassin hired by the Kingpin to kill Daredevil. In the comics she also has dissociative identity disorder, where her villainous persona is a telekinetic and pyrokinetic, but we don’t see that in Iron Fist. Alice Eve is magnetic in the role and is worth watching just for her.

And they just announced the next season of Daredevil for next month. October’s looking good.