“I’m thrilled and grateful to be joining The Cleveland Orchestra as the new principal horn,” said Nathaniel Silberschlag. “Growing up in Southern Maryland, I was surrounded by everything music. I come from a very musical family and remember listening to recordings of The Cleveland Orchestra at a young age. It has such a special sound and an important and historic legacy of horn playing. I feel so privileged to have the opportunity to play under the baton of Cleveland Orchestra Music Director Franz Welser-Möst, whose performances and recordings I have found so influential. And to follow in the footsteps of the amazing principal horn players of this renowned ensemble — Myron Bloom, Richard Solis, and Richard King — is a dream come true. I can’t wait to work with such inspiring and distinguished colleagues, especially the incredible musicians of the horn section.” 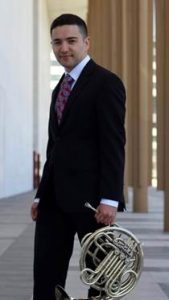 Mr. Silberschlag will begin performing with The Cleveland Orchestra during the 2019 Blossom Music Festival and Summers@Severance seasons, and at the start of the 2019-20 Severance Hall season. The 2019-20 Cleveland Orchestra season encompasses 76 concerts over 26 weeks. A significant highlight includes a festival designed to explore music and art that was banned, marginalized, and destroyed during the Nazi’s Degenerate Art movement, and the continuing impact of censorship on creative expression in society today. The festival will center on Alban Berg’s Lulu, one of the 20th century’s most influential operas, and includes partner programming with the area’s notable arts institutions.

Nathaniel Silberschlag is from Leonardtown, Maryland, which is part of the Chesapeake region, south of Washington, DC. In December 2017 he was appointed Assistant Principal Horn of the Washington National Opera/Kennedy Center Opera House orchestra. At the age of 19, he was their youngest member ever to win a position with the orchestra. Nathaniel is currently finishing his studies with Julie Landsman at The Juilliard School. In May 2019, he will be graduating with a Bachelor of Music degree. He is a proud recipient of a Kovner Fellowship.

Nathaniel comes from of a family of 16 professional musicians. Among them are former principal players of the New York Philharmonic, Italian National Orchestra RAI, and Jerusalem Symphony. He is the third generation of his family to attend the Juilliard School. Nathaniel made his debut in Italy at age 9 and news of this performance appeared on the front page of Italy’s newspaper, “La Stampa.”

At the John F. Kennedy Center for the Performing Arts, Nathaniel is a graduate of the National Symphony Orchestra Youth Fellowship program under the tutelage of Sylvia Alimena as part of her Brass of Peace scholarship program. Nathaniel also spent two summers in the Kennedy Center’s Summer Music Institute. In 2015, Nathaniel was the first recipient of the Edwin C. Thayer, Laurel Bennert Ohlson award for artistry and excellence on the French Horn.

Nathaniel has been a fellow at the Music Academy of the West in the summers of 2017 and 2018. In January 2018, he was named one of ten Zarin Mehta Fellows to perform with the New York Philharmonic as part of their 2018 Global Academy. Since 2007, he has been a full participant fellow at the Alba Music Festival, Italy, as well as attending the Eastern Music Festival in 2016. Currently, Nathaniel is a member of the New York Festival Brass Quintet.

Tess Abney
Tess Abney is a freelance writer who was born and raised in the Quad Cities. She spends most of her time attempting to successfully raise three boys. In her free time, writing is her passion. Whether it is sharing local events and businesses with readers or sharing her thoughts on life, she finds comfort in the way words can bring people together.
Tagged: ClevelandCleveland OrchestraNathaniel SilberschlagPrincipal Horn