Seshollowaterboyz Heading to The Odeon!

Head to The Odeon this Wednesday night for some hip-hop and fun!

Seshollowaterboyz will be performing live at The Odeon (1295 Old River Road Cleveland) this Wednesday Sep 12. Doors open at 6 p.m. and the show begins at 7 p.m. 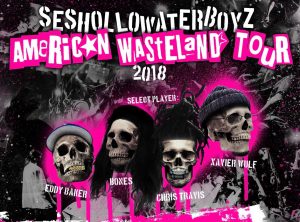 Made up of the four underground rappers Bones, Xavier Wulf, Chris Travis, and Eddy Baker (the latter three rappers are former members of the semi-disbanded underground hip hop collective Raider Klan) Seshollowaterboyz are a hip hop musical collective based in Los Angeles. The name of the collective is a mash-up of their self-releasing labels Team Sesh, Hollow Squad, Water Boyz, and Healthy Boyz. They have performed at notable venues such as The Observatory in Santa Ana, California on November 13, 2016 and The Novo by Microsoft in Los Angeles on January 30, 2016.

General admission tickets are $30 and Early Entry tickets are $45. Purchase your tickets today at https://www.eventbrite.com/e/seshollowaterboyz-bones-xavier-wulf-chris-travis-eddy-baker-live-in-cleveland-tickets-48189976517.

Tess Abney
Tess Abney is a freelance writer who was born and raised in the Quad Cities. She spends most of her time attempting to successfully raise three boys. In her free time, writing is her passion. Whether it is sharing local events and businesses with readers or sharing her thoughts on life, she finds comfort in the way words can bring people together.
Tagged: BonesChris TravisClevelandEddy BakerEventsSeshollowaterboyzThe OdeonThings To DoXavier Wulf