Panic! At The Disco Heading to Quicken Loans Arena

Don’t panic! Panic! At The Disco is coming to Cleveland!

Panic! At The Disco brings their Pray for the Wicked Tour to Quicken Loans Arena (1 Center Ct. Cleveland) this Wednesday Jan 30 at 7 p.m.

Two feet and Betty Who will also be performing. 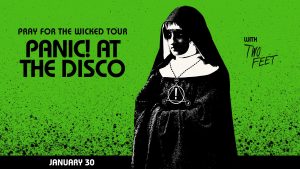 Pray For The Wicked follows Panic! At The Disco’s critically acclaimed fifth album, Death Of A Bachelor, which was released on January 15, 2016 via Fueled By Ramen/DCD2 Records. The album debuted at No. 1 on the Billboard 200 Chart and was nominated for Best Rock Album at the 2017 GRAMMY® Awards. The RIAA platinum selling release was the highest selling rock album and fourth-highest selling album released in 2016, according to Nielsen Soundscan. The album has also spawned RIAA certified gold tracks “Hallelujah,” “LA Devotee,” “Don’t Threaten Me With A Good Time” and platinum “Victorious,” “Death Of A Bachelor,” and “Emperor’s New Clothes.”   Most recently, frontman Brendon Urie starred as Charlie Price in the critically acclaimed Broadway hit Kinky Boots.

Purchase your tickets today at https://www.theqarena.com/events/detail/panic-at-the-disco-190130.

Tess Abney
Tess Abney is a freelance writer who was born and raised in the Quad Cities. She spends most of her time attempting to successfully raise three boys. In her free time, writing is her passion. Whether it is sharing local events and businesses with readers or sharing her thoughts on life, she finds comfort in the way words can bring people together.
Tagged: Betty WhoClevelandEventsPanic! At The DiscoPray for the Wicked TourQuicken Loans ArenaThings To DoTwo Feet