A one of a kind concert is coming to Cleveland! 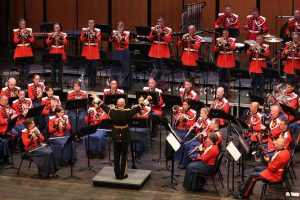 This concert is part of the 2018 U.S. Marine Band National Tour through the Midwest and is sponsored by Lakeland Community College. The concert is free, but tickets are required. Tickets are limited to 4 per request. Tickets are distributed by Severance Hall Box Office. Get your tickets today be calling (216) 231-7300 or online.

The Marine Band is America’s oldest continuously active professional musical organization. Founded in 1798, the band has performed for every U.S. President since John Adams. Known as “The President’s Own” since the days of Thomas Jefferson, the Marine Band’s primary mission is to provide music for the President of the United States and the Commandant of the Marine Corps.

In the style of the band’s 17th Director John Philip Sousa, who initiated the concert tour tradition in 1891, Marine Band Director Col. Jason K. Fettig has chosen a diverse mix of programs, from traditional band repertoire and marches to instrumental solos.

To learn more about the Marine Band, visit www.marineband.marines.mil.

Tess Abney
Tess Abney is a freelance writer who was born and raised in the Quad Cities. She spends most of her time attempting to successfully raise three boys. In her free time, writing is her passion. Whether it is sharing local events and businesses with readers or sharing her thoughts on life, she finds comfort in the way words can bring people together.
Tagged: ClevelandCleveland OrchestraEventsMarine BandNational Concert TourSeverance HallThe President’s BandThings To Do