Home » Articles » Music » Death Cab for Cutie at The Agora

Death Cab for Cutie at The Agora 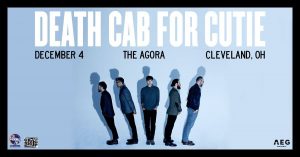 Death Cab for Cutie’s music has been called indie rock, indie pop, and alternative rock. It is noted for its unconventional instrumentation and for Gibbard’s distinctive voice and lyrical style. Since its formation, the band has released nine full-length studio albums, four EPs, two live EPs, one live album, and one demo album.

Thank You for Today is the sound of Death Cab for Cutie both expanding and refining; a band twenty years into its evolution, still uncovering new curves in its signatures, new sonic corners to explore.

General admission tickets are $45 in advance and $50 on the day of the show. Purchase your tickets today at https://www.ticketweb.com/event/death-cab-for-cutie-the-agora-theatre-tickets/8810785?pl=agora.

Tess Abney
Tess Abney is a freelance writer who was born and raised in the Quad Cities. She spends most of her time attempting to successfully raise three boys. In her free time, writing is her passion. Whether it is sharing local events and businesses with readers or sharing her thoughts on life, she finds comfort in the way words can bring people together.
Tagged: 91.3 The SummitClevelandDeath Can for CutieEventsLive MusicThe AgoraThings To Do