The Cleveland Orchestra Youth Orchestra today announced when auditions will take place for the 2019-20 season. Auditions will be held at Severance Hall during the month of May and June. Middle- and high-school student instrumentalists who study privately and actively participate in their school’s music program are invited to audition. Auditions will be heard for the following instruments: violin, viola, cello, double bass, harp, flute, piccolo, oboe, English horn, clarinet, bassoon, contrabassoon, French horn, trumpet, trombone, bass trombone, tuba, percussion, and keyboard. Audition applications must be received by Friday, March 29, 2019. The application fee is $30. Those interested should contact Cleveland Orchestra Youth Orchestra Manager Lauren Generette at 216-231-7352, email coyo@clevelandorchestra.com for information, or download audition materials at clevelandorchestrayouthorchestra.com (click on “Auditions”). 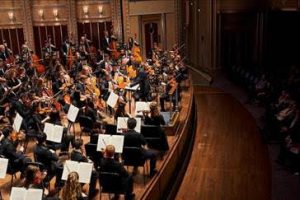 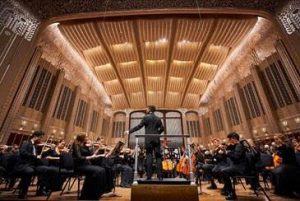 “This is my third year in the Cleveland Orchestra Youth Orchestra, and I have many treasured memories from experiences in this ensemble. It’s hard to describe in words the way we connect,” said COYO violin member Célina Béthoux. “During coachings and side-by-side rehearsals, we learn from Cleveland Orchestra musicians and their own discoveries and happenings on their musical journeys; they have a broad variety of high-level insights to share. Maestro Parameswaran picks out extraordinary repertoire, and, through his incredibly valuable input, helps translate the composer’s emotions and messages for all of the different instruments. I’ve learned so much — not just about orchestral playing, but concepts and musical ideas I can incorporate into solo and chamber music.”

In 1998, the ensemble was one of five youth orchestras chosen to participate in the second National Youth Orchestra Festival at Michigan’s Interlochen Center for the Arts. Three years later, it made its debut at New York’s Carnegie Hall as part of the Carnegie Hall Family Concert Series, and at Penn State University’s Eisenhower Auditorium. In 2009, the Youth Orchestra embarked on a six-day, four-concert tour to Boston, Massachusetts and its surroundings. The Cleveland Orchestra Youth Orchestra made its first international appearance in 2012 with a tour that included concerts in Prague, Vienna, and Salzburg, followed by a second international tour to China in 2015. A third international tour to Europe is planned for June 2019.

The Cleveland Orchestra Youth Orchestra is supported by a generous grant from the Martha Holden Jennings Foundation and by gifts from many other donors from across Northeast Ohio. Endowment support is provided by The George Gund Foundation and the Estate of Jules and Ruth Vinney.

Tess Abney
Tess Abney is a freelance writer who was born and raised in the Quad Cities. She spends most of her time attempting to successfully raise three boys. In her free time, writing is her passion. Whether it is sharing local events and businesses with readers or sharing her thoughts on life, she finds comfort in the way words can bring people together.
Tagged: ClevelandCleveland OrchestraEventsThings To DoYouth Orchestra Auditions