This exciting and varied slate of artists and conductors includes:

In addition to the incredible artists onstage, the programming this summer offers audiences a wide range of music to explore. Concert selections range from treasured classical works — such as Elgar’s Enigma Variations, Beethoven’s Piano Concerto No. 5 (“Emperor”), and Brahms’s Symphony No. 1 — to rarely-heard music for Blossom audiences to discover—including Zemlinksy’s Die Seejungfrau [The Mermaid], based on the Hans Christian Andersen classic The Little Mermaid.

These highlights join the previously announced films included on the 2019 season, Harry Potter and The Sorcerer’s StoneTM (June 29 & 30) and Star Wars: The Empire Strikes BackTM (August 30 & 31). Due to popular demand, an additional concert of the beloved action-packed film Star Wars: The Empire Strikes BackTM will take place on Labor Day Weekend (September 1). See the calendar listing below for updates to the featured artists and times for these concerts. 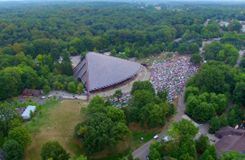 Details of the 2019 Blossom Music Festival season, including the full list of Cleveland Orchestra and Festival soloist and conductor debuts, are available in the Calendar section below and online at clevelandorchestra.com. Concert schedules and series renewals are being mailed to subscribers of last year’s Festival, and new series packages are available for purchase now. Lawn Ticket Books are also on sale now. Individual tickets for the entire season go on sale to the general public in April.

BLOSSOM MUSIC CENTER GUEST EXPERIENCE
The Cleveland Orchestra is committed to providing a world-class guest experience for all visitors to Blossom Music Center. Every year, Blossom audiences eagerly await a summer of picnics on the lawn, gatherings with friends and family, and incredible music under the stars. Updates at Blossom that will enhance that already-top-notch experience include:

FAMILY-FRIENDLY “UNDER 18S FREE” TICKETS CONTINUE AT EVERY BLOSSOM MUSIC FESTIVAL CONCERT
“Under 18s Free” is a program of The Cleveland Orchestra’s Center for Future Audiences. The Center, created with a lead endowment gift from the Maltz Family Foundation, was established to fund programs to develop new generations of audiences for Cleveland Orchestra concerts in Northeast Ohio. “Under 18s Free” continues to develop young audiences by making attending Orchestra concerts affordable for families, once again offering free Lawn tickets to young people (17 and under) for every Blossom Music Festival concert this season. Over 150,000 young people have attended Blossom Music Festival concerts since the Center for Future Audiences was inaugurated.

At Blossom, this program offers free “Under 18s Free” Lawn Passes (two per regular-priced adult paid admission) to young people to any Blossom Music Festival subscription concert each summer. These tickets can be ordered online (once individual tickets for each Blossom season go on sale) or through the Ticket Office. “Under 18s Free” tickets are also available as part of Lawn Book purchases (see below for more details).

The Cleveland Orchestra is proud to partner with The J.M. Smucker Company as the Presenting Sponsor of the 2019 Blossom Music Festival. 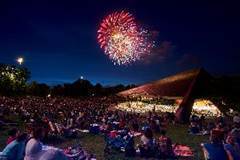 The J.M. Smucker Company and The Cleveland Orchestra

The J.M. Smucker Company has supported The Cleveland Orchestra for decades with annual contributions as well as capital gifts for improvements at Blossom Music Center. The company’s ongoing, remarkable support has been recognized through concert sponsorship at Blossom for over a decade, and has earned membership in the Orchestra’s John L. Severance Society — a group of the Orchestra’s most dedicated and generous corporate, foundation, and individual supporters. Additionally, The J.M. Smucker Company was a co-presenting sponsor of The Cleveland Orchestra’s Second Century Celebration, bringing the Orchestra’s 100th season to life while animating a bold vision for an extraordinary Second Century.

Cleveland Orchestra Board Chair Richard K. Smucker is the Executive Chairman of The J.M. Smucker Company, which was founded more than a century ago by Mr. Smucker’s great-grandfather, Jerome Smucker. Today, The J.M. Smucker Company is a leading marketer and manufacturer of consumer food and beverage products, as well as pet food and pet snacks, in North America. The company remains rooted in the Basic Beliefs of Quality, People, Ethics, Growth, and Independence established by its founder and namesake more than 120 years ago.

ideastream serves the people of Northeast Ohio as a trusted and dynamic multimedia source for illuminating the world around us. Publicly supported and locally owned, ideastream is indispensable and highly valued for its unique ability to strengthen our community. ideastream is the consolidation of WVIZ/PBS, with five channels of public television service (WVIZ/PBS-HD, WVIZ/PBS OHIO, WVIZ/PBS WORLD, WVIZ/PBS CREATE and WVIZ/PBS KIDS); 90.3 WCPN, Northeast Ohio’s NPR news and public affairs radio station; WCLV 104.9, Northeast Ohio’s classical music radio station; ideastream Education, with educational resources, services and the award-winning children’s series NewsDepth; and management of The Ohio Channel and the Ohio Public Radio and Television Statehouse News Bureau on behalf of all Ohio’s public broadcasting stations. For more information about ideastream’s rich legacy of innovation and credible content, visit ideastream.org.

Deep gratitude goes to the entire Northeast Ohio community, The J.M. Smucker Company, The Goodyear Tire & Rubber Company, and all of our sponsors, whose incredible support, dedication, and generosity makes possible these magical evenings at The Cleveland Orchestra’s beautiful summer home.

2019 TICKET AND SUBSCRIPTION INFORMATION
Subscription Renewals are currently underway with Premier Subscriptions, Create-Your-Own Series, and Lawn Ticket Books now available for purchase. Individual concert tickets go on public sale in April by telephone, in person at the Severance Hall Ticket Office, and online at clevelandorchestra.com. Tickets start at $25. The Blossom Box Office opens for the season beginning on Saturday, June 1, and will be open throughout the summer on Saturdays and Sundays from 1:00 to 5:00 p.m. and from 1:00 p.m. through intermission on festival performance days.

Group Ticket Sales
Discounts are available for groups of 10 or more. Call the Cleveland Orchestra Group Sales Office at Severance Hall at 216-231-7493 for more information.

ABOUT BLOSSOM MUSIC CENTER, SUMMER HOME OF THE CLEVELAND

Blossom Music Center was created as the summer home of The Cleveland Orchestra and opened in July 1968 with performances of Beethoven’s Ninth Symphony conducted by George Szell. The 200-acre music park features the award-winning and acoustically-acclaimed Blossom Pavilion, designed by renowned Cleveland architect Peter van Dijk and seating over 5,000 under cover. The adjoining Blossom Lawn accommodates as many as 15,000 more outside on an expansive natural-bowl amphitheater of grass surrounded by bucolic woods.

In the half-century since Blossom’s opening, headline makers and yet-to-be-discovered young artists across all genres have created unforgettable musical experiences for over 21 million visitors. Each summer, Blossom serves more than 400,000 visitors, who attend concerts ranging from rock, country, and pop to classical. Live Nation operates Blossom under a long-term contract with The Cleveland Orchestra, dividing each year between the Orchestra’s Blossom Music Festival of orchestral performances (July Fourth to Labor Day weekends) and a series of presentations from across a wide range of rock, country, and other live-concert genres.

Located 25 miles south of Cleveland just north of Akron, Ohio, Blossom is situated in the rolling hills of Cuyahoga Valley National Park, which preserves 33,000 acres of natural parkland along the Cuyahoga River. Blossom Music Center was named to honor the Dudley S. Blossom family, who have been major supporters of The Cleveland Orchestra throughout its history. Blossom lies within the city limits of Cuyahoga Falls, an Ohio community first settled in the early 1800s, at 1145 West Steels Corners Road in Summit County.

Join us for an evening of music and magic as the acclaimed Cleveland Orchestra performs a live version of composer John Williams’s notable score during a (giant!) screening of the first Harry Potter film.

Great music, fireworks, and fun for the whole family for the 50th anniversary of the Blossom Festival Band! Blossom’s traditional, star-spangled celebration features a mix of patriotic Sousa marches, Broadway favorites, an Armed Forces Salute, and more – concluding with fireworks!

Celebrate summer with four extraordinary scores by four extraordinary composers — performed by one of the world’s finest orchestras. End your night with a bang — literally! — by listening to Tchaikovsky’s 1812 Overture and watching a fireworks display.

The iconic folk trio Peter, Paul and Mary made music together for nearly 50 years. In this intimate evening of song and reflection, Peter and Paul remember their enduring anthems of social change including “If I Had a Hammer” and “Puff the Magic Dragon,” the historic impact they had upon the world of civil liberties, and the woman who completed their triforce of positivity, Mary Travers.

MUSSORGSKY  “Dawn on the Moskva River” from Khovanshchina
PROKOFIEV  Piano Concerto No. 3
TCHAIKOVSKY  Symphony No. 4

Experience a clarion call for shimmering stars — Tchaikovsky’s Symphony No. 4 was modeled in part on Beethoven’s Fifth Symphony and is filled with the type of brassy fanfare seemingly intended for a midsummer’s night.

Composer Max Bruch once said he loved the violin because it could “sing a melody better than a piano, and melody is the soul of music.”  Hear Bruch’s most melodic and soulful creation performed by teen prodigy Daniel Lozakovich in his Cleveland Orchestra debut.

Inspired by one of Spain’s royal gardens, Concierto de Aranjuez was composed by Joaquín Rodrigo to take listeners on a journey to another place and time with its hints of natural sounds. Here’s an invitation to be transported by famed guitarist Pepe Romero, who’s renowned for his interpretation of this cherished masterpiece.

Do you like puzzles? Legend has it there’s a hidden melody in Edward Elgar’s eminent score, which features 14 variations on an original theme — each a separate musical draft about a friend or family member. His ninth variation, called Nimrod, has been widely adapted for films such asDunkirk and Elizabeth.

Named the greatest singer of all time by Rolling Stone magazine, Aretha Franklin was the undisputed Queen of Soul during her 61-year career. Hear R&B standards such as “Respect,” “Chain of Fools,” and “(You Make Me Feel Like) A Natural Woman,” performed by Blossom favorite, Capathia Jenkins.

Here’s a chance to be treated like royalty when celebrated pianist Francesco Piemontesi performs Beethoven’s most famous concerto, nicknamed Emperor, which was dedicated to his patron and pupil — Archduke Rudolf of Austria.

Co-founder of iconic California rockers The Beach Boys, Brian Wilson — accompanied by bandmates Al Jardine and Blondie Chaplin — will play summertime favorites from the group’s influential 1966 album Pet Sounds, including “Wouldn’t It Be Nice,” “Sloop John B” and “God Only Knows,” along with other greatest hits.

THE SOUND OF MUSIC IN CONCERT

RODGERS  The Sound of Music (full musical in concert performance)

Spend a night with the Von Trapp Family during a collaboration between The Cleveland Orchestra and members of the Baldwin Wallace University Music Theater program in this beloved Rodgers & Hammerstein classic, featuring treasured tunes such as “Do-Re-Mi,” “My Favorite Things,” and “Climb Ev’ry Mountain.”

Presentation of Star Wars: The Empire Strikes Back” licensed by Disney Concerts in association with 20th Century Fox, Lucasfilm Ltd. and Warner/Chappell Music.

Tess Abney
Tess Abney is a freelance writer who was born and raised in the Quad Cities. She spends most of her time attempting to successfully raise three boys. In her free time, writing is her passion. Whether it is sharing local events and businesses with readers or sharing her thoughts on life, she finds comfort in the way words can bring people together.
Tagged: Blossom Music FestivalClevelandCleveland OrchestraEventsJ.M. Smucker CompanyThings To Do