Kevin Hart bring his hilarity to Cleveland for one night only! 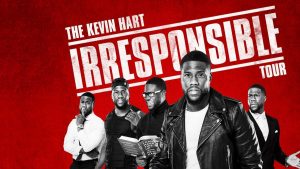 Ticket prices vary and can be purchased online at https://www.ticketmaster.com/kevin-hart-quicken-loans-arena-cleveland-oh/venueartist/40976/1057637.

Kevin Hart, recently finding onscreen triumph with the movie Jumanji: Welcome to the Jungle, is no stranger to the comedy stage. After the initial run of Irresponsible Tour turned out to be so successful, the A-lister made the decision to add another 100 dates on the tour. The show will feature new material from the comedy superstar and will pick up where his last comedy tour picked up.

Join Kevin Hart on his Irresponsible Tour, this Thursday!

Tess Abney
Tess Abney is a freelance writer who was born and raised in the Quad Cities. She spends most of her time attempting to successfully raise three boys. In her free time, writing is her passion. Whether it is sharing local events and businesses with readers or sharing her thoughts on life, she finds comfort in the way words can bring people together.
Tagged: ClevelandComedyEventsIrresponsible Tourkevin hartQuicken Loans ArenaThings To Do