Do you need some laughter in your life? 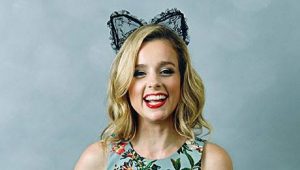 Erica Rhodes has appeared on ABC’s Modern Family, HBO’s Veep, Fox’s New Girl, IFC’s Comedy Bang Bang, and recurred on TruTV’s Fameless.   She was a regular panelist on Comedy Central’s @midnight and Fox’s Punchline.   Her standup TV appearances include NBC’s Last Call with Carson Daly, SeeSo’s The Guest List, Hulu’s Coming to the Stage, and AXS’ Live at Gotham.  Erica has performed at the Just for Laughs Festival (Montreal), San Francisco Sketchfest, the Moontower Comedy Festival (Austin, TX), the Blue Whale Comedy Festival (Tulsa, OK), the Boston Comedy Festival and RIOT L.A. Fest. She was a semi-regular performer/writer on NPR’s A Prairie Home Companion and currently stars in Audible’s Dr. Katz: The Audiobook and ABC Digital’s The Off-Season.   She can soon be seen performing standup on a Howie Mandel-hosted Just for Laughs TV special which airs this fall on the CW.

Tess Abney
Tess Abney is a freelance writer who was born and raised in the Quad Cities. She spends most of her time attempting to successfully raise three boys. In her free time, writing is her passion. Whether it is sharing local events and businesses with readers or sharing her thoughts on life, she finds comfort in the way words can bring people together.
Tagged: ClevelandComedyErica RhodesEventsHilarities 4th Street TheatrePickwick & FrolicThings To Do