One of America’s funniest comedians can be found in Cleveland all weekend long!

DeRay Davis will be performing at the Cleveland Improv (1148 Main Ave Cleveland) from Thursday Jan 10 through Sunday Jan 13. 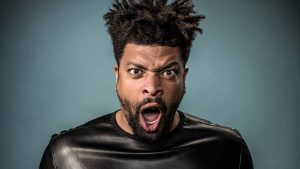 DeRay Davis is quickly killing Hollywood with his hilarious humor and persona. His film credits include Jumping the Broom, Semi-Pro, Old Dogs, Life as We Know It, Imagine That, License to Wed, School for Scoundrels, Scary Movie 4, Barbershop 1&2 and Johnson Family Vacation.

DeRay can next be seen in the Sony feature 21 Jump Street in 2012. And his 1 hour Comedy Special POWER PLAY debuts on Showtime Friday July 1, 2011 and is available OnDemand July 2nd thru July 29th.

On the recording side, DeRay wrote and performed the comedy skits on Kanye West’s LPs “Late Registration” and “The College Dropout”, and he performed at the 2006 Grammy Awards with Kanye West and Jamie Foxx.

A born hustler from Chicago’s South Side, DeRay began his career in the comedy clubs and was first noticed by Hollywood at Atlanta’s Laffapalooza Festival. Shortly after moving to LA, DeRay won the Comedy Central Laugh Riots Competition and was a standout on the Cedric the Entertainer Tour and at the Montreal Just for Laughs Festival.

You can catch DeRay Davis at one of the following shows:

All shows are 21 and over. Tickets can be purchased online.

Tess Abney
Tess Abney is a freelance writer who was born and raised in the Quad Cities. She spends most of her time attempting to successfully raise three boys. In her free time, writing is her passion. Whether it is sharing local events and businesses with readers or sharing her thoughts on life, she finds comfort in the way words can bring people together.
Tagged: ClevelandCleveland ImprovComedyDeray DavisEventsThings To Do