Home » Articles » Local » Craig Robinson, Out of the Office and Heading to Cleveland

Craig Robinson, Out of the Office and Heading to Cleveland 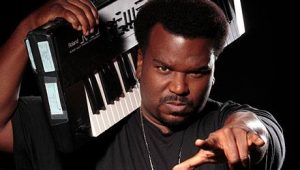 Beginning as a stand-up comedian in Chicago, Robinson first made his mark in the comedy circuit at the 1998 Montreal “Just For Laughs” Festival. Before deciding to pursue his comedy career full time, Robinson was a K-8 teacher in the Chicago Public School System. He earned his undergraduate degree from Illinois State University and his Masters of Education from St. Xavier University.

It was while Craig was studying education in Chicago that he also discovered his love of acting and comedy when he joined the famed Second City Theatre. Craig is best known for his portrayal of Daryl Philban in NBC’s “The Office” but has also starred in such movies as KNOCKED UP, THIS IS THE END, THE HOT TUB TIME MACHINE SERIES, and MORRIS FROM AMERICA the latter of which he won a Special Grand Jury prize for acting at Sundance in 2016. You can catch Craig as Leroy in FOX’s new paranormal comedy series, GHOSTED. Craig currently resides in Los Angeles and continues to headline solo dates as well as with his band “The Nasty Delicious” all across the globe.

Ticket prices range and can be purchased today at https://www.pickwickandfrolic.com/2018/03/craig-robinson/.

Tess Abney
Tess Abney is a freelance writer who was born and raised in the Quad Cities. She spends most of her time attempting to successfully raise three boys. In her free time, writing is her passion. Whether it is sharing local events and businesses with readers or sharing her thoughts on life, she finds comfort in the way words can bring people together.
Tagged: ClevelandComedyCraig RobinsonEventsHilarities 4th Street TheatrePickwick and FrolicThe OfficeThings To Do