One of the most popular and highly recognized standup comedians on the road today is making a stop right here in Cleveland!

D.L. Hughley will be taking the stage at Cleveland Improv (1148 Main Ave. Cleveland) this Friday Oct 19 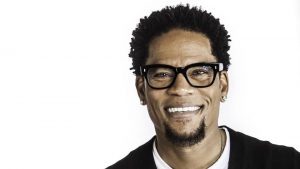 Known for being astute and politically savvy in true comedian style, D.L. served as host of his own late-night talk show on CNN “D.L. Hughley Breaks the News.” Proving he could, indeed break news, D.L. was able to uncover startling, news-making comments from such guests as former White House press secretaries Scott McClellan and Ari Fleischer, as well as RNC chair Michael Steele.

A standup comedian to the core, D.L. starred in his own one-hour special for HBO entitled “Unapologetic.” The special, D.L.’s fourth for the network, is currently available on DVD. In 2007, D.L. starred on the NBC series “Studio 60 on the Sunset Strip” and also HBO’s “Def Comedy Jam” , as well as the BET series “S.O.B: Socially Offensive Behavior”.

Tess Abney
Tess Abney is a freelance writer who was born and raised in the Quad Cities. She spends most of her time attempting to successfully raise three boys. In her free time, writing is her passion. Whether it is sharing local events and businesses with readers or sharing her thoughts on life, she finds comfort in the way words can bring people together.
Tagged: ClevelandCleveland ImprovComedyD.L. HughleyDL HughleyEventsThings To Do